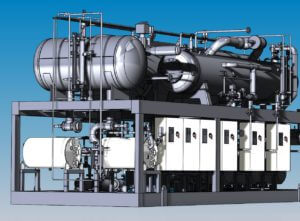 Advantages of using ammonia as a refrigerant:

Environmentally friendly – this is like one of living organisms waste products. It doesn’t depletion of the ozone layer and doesn’t create a greenhouse effect. Less fluid than freon ammonia doesn’t penetrate the crystal lattice of ferrous metals. Ammonia-based plants can be made of cheaper metals. Moreover, ammonia enters into chemical reactions with many non-ferrous metals, forming amides of metals.

Much cheaper than freon

Specific capacity of production is approximately 3.5 times higher than other refrigerants. Ammonia is characterized by a strong sharp odor which allows you to operatively determinate and eliminate leakage.

Safe use of ammonia refrigerating systems

Since ammonia is an explosive, fire-hazardous, suffocating and poisonous substance, any object with an installed ammonia refrigeration plant can be a chemically dangerous object. Taking into account that plant includes equipment under excessive pressure, you main need to obtain a special license in accordance with regulations of explosive and chemically hazardous production facilities (Class I, II and III hazard categories according to Russian classification)

Use of ammonia as a potentially dangerous gas is strictly regulated by the safety rules for ammonia refrigeration plants. (ПБ 09-595-03).

Special attention should be paid to ensuring the safety of operation of refrigeration systems that have been in operation for more than 20 years. Most of the existing ammonia refrigeration plants need to be technically re-equipped and upgraded. This equipment is technically outdated as well as its operating life almost depleted.

If you need detailed information on ammonia-based refrigeration plant or their technical re-equip, please send us your request or question by info@tehnomir.biz or call us at (812) 346-56-66. 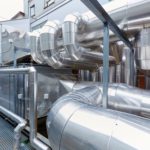 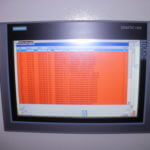 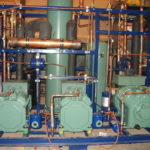 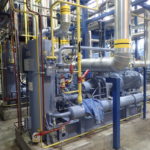 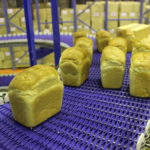 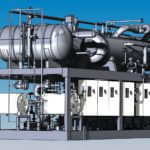